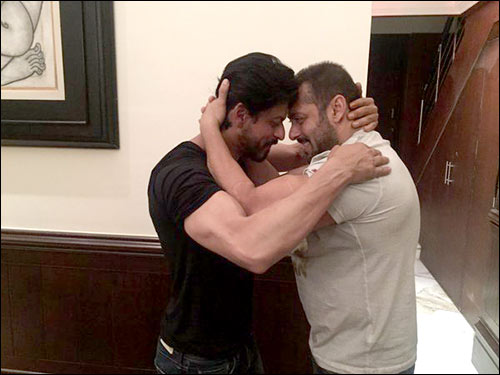 Putting an end to all the rumours of an alleged cold war between the two Khans, Salman Khan and Shah Rukh Khan recently went on record to not only praise each other's work but were seen at events like Arpita Khan's wedding together. And now, when Shah Rukh Khan turned 50 a day ago, Salman Khan decided to wish the superstar in his unique style. He not only visited the actor to personally wish him on the occasion but we could see the spark of friendship once again blooming between these two Khans.

Shah Rukh Khan took to Twitter to post a few pictures where he is seen having a fun fight session with Salman Khan on his birthday. Shah Rukh Khan captioned one of the images saying, "Bhai teaching me the moves for Sultan on my birthday." His next image that he posted, he used a caption promoting Salman Khan's upcoming film saying, "Prem Ratan Dhan Payo". The actors who have been a victim of many controversies and speculations over their alleged fallout have finally shared a few special moments for their fans to cherish.


After seeing their friendship rekindle, we wonder if they will find a way to avoid the clash between two potential blockbusters - Raees and Sultan.