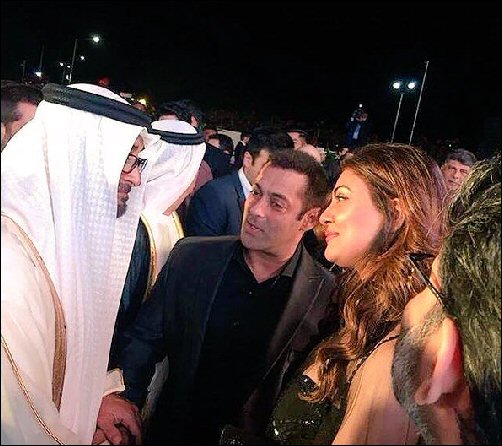 When Prince of Abu Dhabi, Mohammed Bin Zayed Sultan Al-Nahyan landed in Mumbai, a lavish party was organized in honour of the royalty for his high profile guests in the country at a plush five star restaurant in the city. Many big personalities graced the occasion and amidst the several inside pics from the party, we saw Salman Khan and his best friend and colleague Sushmita Sen at the event.


We hear that despite the hectic shoot schedule of his upcoming wrestling drama Sultan, Salman Khan took some time off to meet Mohammed Bin Zayed Bin at the royal dinner. Along with him, former beauty queen Sushmita too was seen interacting with the Prince. The picture has been doing rounds on the internet where Salman Khan was in a well suited avatar while Sushmita was her glamorous self.


Salman Khan and Sushmita Sen have shared a great bond since the start and have also worked in a handful films including Biwi No.1 and Maine Pyaar Kyun Kiya.