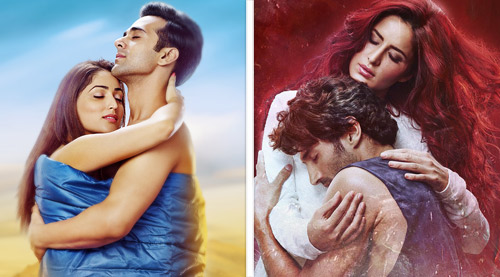 Khosla Kumar's second directorial venture, the latter which featured Katrina Kaif, Aditya Roy Kapur and Tabu was an adaptation of the classic novel 'Great Expectations' by Charles Dickens. However,

both films revolved around the central theme of love and with Valentine's Day round the corner, we decided to analyze which one of them would have an edge over the other at the box office.


Music: Music always plays an important role in assisting a film's promotions prior to its release. In the case of Sanam Re, that is backed by the music giant T-Series, the film

boasts of a soundtrack that has been topping charts since its release. On the other hand, Fitoor featured just a couple of track that caught on with the audience.


Screen Count: Once released, the fate of a film depends not just on critics reviews and the audience verdict but also on the visibility it gets. Here Sanam Re was at a distinct

advantage with the film releasing across 2030 screens in India, promising over 7000 shows! However, Fitoor released across 1225 screens considerably lesser than its competitor.


Studio backing: Another factor that plays an important role in aiding a film's overall success is the studio name attached with it. While both the new releases had big names viz. T-Series

and UTV Disney attached to it, Sanam Re had an upper hand with the last two releases from T-Series (Airlift and Hate Story 3) working well at the box- office setting the pace

for its newer releases.


Star quotient: Obviously a big name being attached to a film, especially in its cast, does boost its overall likeability. However, for Fitoor, Katrina Kaif's star power seemed

somewhat diminished. Compounding this was the fact that Aditya Roy Kapur's last release Daawat-E-Ishq was a rather forgettable affair, proving the adage that a star is only worth his last


Budget: When calculating the profitability of a film what needs to be looked at is the cumulative budget of the making of the film. In case of Sanam Re, the film was made on a rather

controlled budget; hence the return on investment rate will be higher when compared to Fitoor, which was made on a considerably higher budget. Sanam Re hence is a far more profitable


While these five points were paramount in giving Sanam Re an advantage, what further helped the film was the fact that it featured stunning visuals and good on screen chemistry between the

lead pair. Besides this, Fitoor that was an adaptation of 'Great Expectations' did little to resemble the story from the novel, turning out to be more of a slow art film. On the whole,

Sanam Re has collected Rs. 5.04 cr on opening day collection while, Fitoor earn Rs. 3.61 cr in the same time period. The weekend and lifetime collections of Sanam Re should

also be higher than Fitoor.