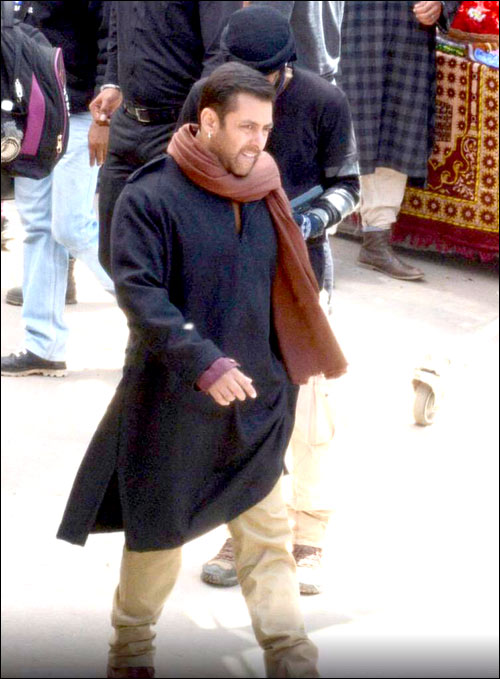 Just a couple of days ago, we had reported that Salman Khan was suffering from ear infection and sinus problems whilst shooting for Bajrangi Bhaijaan in Kashmir. The shooting, then, had been stalled temporarily but the actor seems to be back on his feet now.


While we were aware that the actor was on pain killers for a speedy recovery, now, if the picture is anything to go by, Salman Khan has already resumed the shoot. Bajrangi Bhaijaan will have Salman in his elements, in an action packed avatar and the plot will revolve around his relationship with a Pakistani girl. The actor was also spotted shooting with his co-star Nawazuddin Siddiqui in a Kashmiri avatar during the extensive schedule in Kashmir

However, the shooting in the valley was not a smooth walk. Bajrangi Bhaijaan faced difficulties owing to Salman Khan's fan following. It happened so that the crew was halted at Pahalgham to shoot a particular sequence and the fans of the superstar surrounded the area in order to catch a glimpse of him. The situation required the security to intervene who took matters into their hands which resulted in chaos leaving a few injured. Hence, the upset fans started protesting outside the shooting venue, and shouting 'Salman Hai Hai'. However, we hear that soon the situation was under control and the crew continued to shoot.


Bajrangi Bhaijaan also stars Kareena Kapoor Khan as the female lead and produced by Salman Khan in association with Eros. The film is slated to release on July 16, 2015.