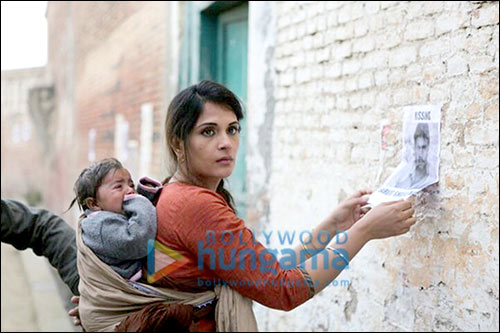 Omung Kumar, who is all set for another biopic Sarbjit after the success of Mary Kom, has already started the shoot of the film in Punjab. Richa Chadda plays one of the most prominent roles in the film, wherein, she plays the role of slain prisoner Sarbjit Singh's wife Sukhpreet.


While we had already received a glimpse of her Punjaban avatar in the film, here is a de-glam side of the actress who also plays a mother in the film. Sarbjit traces the journey of a farmer, whose mistake of crossing the Indo-Pak in high spirits, not only lands him in jail but he is imprisoned forever. The said image, portrays the condition of his wife Sukhpreet, who unaware of her husband's brush with law, is desperately searching for him by putting 'missing' posters of Sarbjit across the village.


Starring Randeep Hooda as Sarbjit Singh and Aishwarya Rai Bachchan as his sister Dalbir Kaur who fights for her brother's justice, the film is slated to release on May 20.