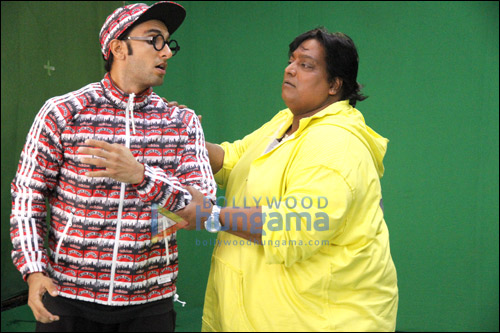 Earlier we reported that Govinda will be doing a cameo in Ganesh Acharya's Hey Bro and now it is Ranveer Singh who will be seen dancing in the choreographer's directorial venture. While Govinda is doing a guest appearance in the film, Ranveer Singh will just be a part of the song.


Ranveer Singh is seen wearing a quirky shirt and a matching cap with glasses looking absolutely different from his usual self. Apart from Ranveer, Ganesh has also shot with Prabhu Dheva. Besides them, the song in question will also see Amitabh Bachchan, Shah Rukh Khan, Akshay Kumar, Ajay Devgn, Hrithik Roshan making an appearance.


Ganesh also mentioned that none of the actors will be playing themselves and since all of them are busy actors, he will be shooting with them separately for the songs.


Hey Bro is a film about twin brothers, out of which one of the leads is played by Ganesh himself and his brother is played by actor Mahinder, who will be seen playing a cop in the film. Produced by Vidhi Acharya and directed by Ajay Chandok, Hey Bro is said to be an emotional drama with elements of comedy and Ganesh Acharya will play the character of Gopi.