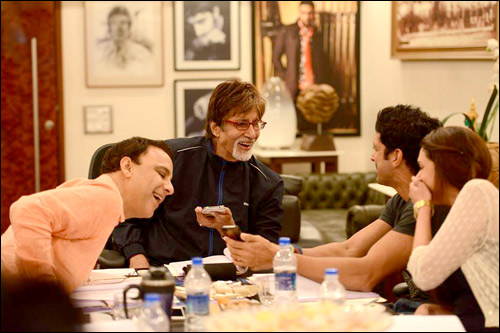 Farhan Akhtar and Amitabh Bachchan will be sharing screen space together for the first time in Bejoy Nambiar's Do. While Aditi Rao Hydari will be playing the female lead, Vidhu Vinod Chopra will be producing it.


Earlier we had reported that Do is slated to go on floors by the end of September. But before the actors get ready to play their respective characters, they met up for a reading session which turned out to be a good mix of work and laughter. A recent picture posted by Amitabh Bachchan on his blog and micro blogging site saw the cast and the producer Vidhu Vinod Chopra sharing a joke during the reading session. Talking about the moment, Amitabh Bachchan posted, "Work on the readings and rehearsals for the next film with Bijoy Nambiar and Vidhu Vinod Chopra."


Initially the role of Aditi Rao Hydari was offered to Kareena Kapoor but the deal did not work and out and later Aditi was signed for the part.


Amitabh Bachchan is said to play the role of an ailing, bed ridden chess-master in the film.