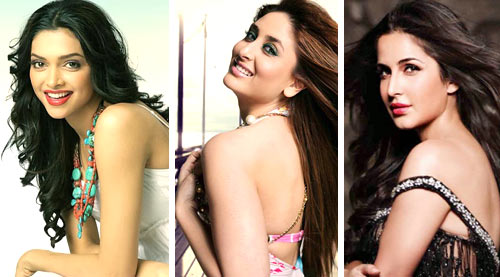 They brook no competition today - Deepika Padukone, whose latest triumph is the 'niche' product that's become a hit - Finding Fanny - and the four ladies who come closest to her - in alphabetical order - Kareena Kapoor, Katrina Kaif, Priyanka Chopra and Sonakshi Sinha.

Five actresses: and five completely different approaches to their careers. It is all the more fascinating because they have kept all competition at bay (the next pack is led by the young guns like Alia Bhatt, Shraddha Kapoor and Parineeti Chopra) even from their contemporaries, which, timeline-wise, means a voluminous list indeed from Aishwarya Rai Bachchan to Asin.

Let us look at the USP of each of the ruling five:

Deepika Padukone leads today in more than just the alphabetical sense. But for the bilingual Tamil film Kochadaiiyaan, for which she shot for just two days to get the Motion Capture technology record her face and body track-points, she has had a hit-streak that began with the successful Cocktail in 2012.

Career-building blocks: Beginning in Hindi with a fabulous double role in Om Shanti Om (2007), Deepika Padukone had hits like Love Aaj Kal and Housefull and winning performances in films like Lafangey Parindey and Aarakshan.

In 2013, she moved on to four blockbusters - Race 2, Yeh Jawaani Hai Deewani, Chennai Express, Goliyon Ki Rasleela Ram-Leela - and she has now had her smallest yet biggest triumph, Finding Fanny. We use the word 'biggest' because this unusual and realistic English language dark comedy has become big after being positioned as a Deepika-Arjun Kapoor film, showcasing the lady's most remarkable commercial feat yet!

USP: The director, co-star and production setup all cease to matter once Deepika Padukone green-lights a project. Deepika's choice of varied roles is as sagacious as the overall caliber of the films she agrees to do. Not only are the characters she plays completely identifiable, whether realistic or larger-than-life, but Deepika transforms herself into them, effortlessly overshadowing co-stars from a Shah Rukh Khan to a Ranveer Singh and Naseeruddin Shah!

Her body language, expressions and tenor completely metamorphose to fit the specific vision of the director, rising above each script as her understanding of the role delivers a knockout act.

Kareena Kapoor Khan, in some ways, is Deepika's complete opposite, wearing her Kapoor pedigree proudly on her sleeve as a star rather than an actress. Yes, she was superb in Kabhi Khushi Kabhie Gham... and did her early offbeat experiment splendidly in Chameli (2004).

Career-building blocks: Kareena began her career with J.P. Dutta's Refugee in 2000, and creditably has been in the big league for a decade-and-a-half, which itself qualifies her for a superstar status, as few actresses last so long at the top. Mujhe Kucch Kehna Hai, Aitraaz, 36 China Town, Don, Jab We Met and Golmaal Returns are her early Hall of Fame movies.

USP: Add a terrific and consistent rapport with every top hero from the three Khans to Hrithik Roshan (four films and an aborted Shuddhi), Akshay Kumar and Ajay Devgn (she has done home productions of all the Khans and Devgn), and now Kareena can boast of some of the biggest hits in the last five years, including 3 Idiots, Golmaal 3, Bodyguard, Ra.One (technically a Rs.120-crore grosser), Talaash and now Singham Returns. She is also the item girl in Rowdy Rathore and Dabangg 2 and the forthcoming Gabbar and is Salman's heroine in Bajrangi Bhaijaan.

"Though I admire Rani Mukerji and Priyanka Chopra for roles like Mardaani and Mary Kom, I would prefer to dance and sing!" she preens. Why not?

Katrina Kaif seems to be a magician in her choice of films. Only five of her 17 lead role films have flopped so far, one of which was the Hinglish film Boom, with which she made her debut.

USP: Her USP, therefore, is undoubtedly her uncanny selection of scripts of all kinds, budgets and co-stars. Though she smilingly attributes her incredible track-record to luck, there is certainly something more to it, especially when we understand that very few of her roles have called for great histrionics. That said, Katrina Kaif was outstanding in Namastey London, New York and Raajneeti.

Her first signed film came and went unnoticed last year, but that was Destiny shaping up Miss World's film career.

Career-building blocks: Definitively the most talented and versatile of the ramp brigade, besides being amazingly grounded, professional and focused, Priyanka Chopra's first release was The Hero (2003) in a miniscule role. She made her mark the same year with Andaaz (which also introduced Lara Dutta), and at that stage went on the potboiler phase for a while, though she also did Mujhse Shaadi Karoge? , her second hit with Akshay Kumar. Then came Aitraaz, in which she stole the show and all "Negative Role" awards that year, and with which she developed a yen for excellence.

The opportunities, however, came slowly, but a better grade of films did, like Waqt - The Race Against Time, Krrish, Bluffmaster!, Don, Dostana and Fashion (which clinched the histrionic deal as she bagged the National award!). Subsequent films like Kaminey, What's Your Raashee? (in nine roles!) and 7 Khoon Maaf helped categorize her as a "thinking" actor, before Don 2 and Agneepath reasserted her commercial standing.

USP: 2012 onwards, Priyanka Chopra is a dependable star who's the perfect mix of saleable material and dedicated performances. Her Barfi! deserved all the awards for her incredible rendition of an autistic girl, and now Mary Kom seems set to rectify that injustice.

This dress designer trainee was "discovered' by family friend Salman Khan and signed for Dabangg. And when you start at the top, you can't go wrong unless you try really hard!

Career-building Blocks: Sonakshi Sinha, like Kareena, has star pedigree and is cruising along smoothly in song-and-dance roles, unmindful of her detractors who term her as just another typically Indian naari on celluloid. The hit spree (Dabangg, Rowdy Rathore, Son Of Sardaar, Dabangg 2, OMG - Oh My God! in a super-hit cameo, Râ€¦Rajkumar, Holiday) with big names and her utter professionalism has made her survive and do more big films like Action Jackson (Ajay Devgn) and two South films with Rajinikanth and Mahesh Babu respectively.

USP: A star quality that is identifiable as wholesome in a generation known to expose more skin than star charisma, Sonakshi Sinha has challenged filmmakers to give her at least a Lootera, in which she was the only good thing.

Hopefully, the confident and charming Sonakshi Sinha will prove in her work to come that she is not in the top five only because of her rapport with Salman, Akshay and Ajay!