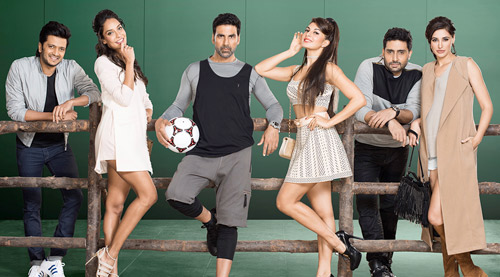 One of the major clashes in the making has been averted. It had seemed that Summer 2016 would have its first major box office battle on June 3 when Housefull 3, Jagga Jasoos and Raaz Reboot would take on each other. As has turned out though, both Jagga Jasoos as well as Raaz Reboot have been moved ahead, which means Housefull 3 would have all 'full houses' for itself on that day.

"Katrina Kaif, the leading lady of Jagga Jasoos, has just announced that the film won't release before July end or August since some work on the film is still pending. On the other hand Vikram Bhatt too made it quite clear on Twitter that Raaz Reboot is aiming for July end release. This leaves only Housefull 3 in the fray," confirms our source.

It makes sense too. The much-delayed Jagga Jasoos by Anurag Basu is aiming for perfection and it would only gain further if it arrives on a day when it can have good screens for itself. For Ranbir Kapoor, the film has to work and the last thing it would need is a clash with a biggie or two. As for Raaz Reboot, the film is the biggest and the most successful horror franchise that Bollywood boasts of. Raaz 3 had done a tremendous business of 73 crore. A release taking place few weeks down the line won't make a difference to the Emraan Hashmi starrer which has Bhatts backing it up.

"It is a good decision," a trade expert adds, "A clash doesn't help anyone, especially when it is between biggies. One of the films is bound to suffer, or at least have a dip in collections. It is good that rather than negativity around a clash building up, those involved with Jagga Jasoos and Raaz Reboot have announced their decision a good four months in advance. It is as mature as it gets."

As for Housefull 3, producer Sajid Nadiadwala has reasons to rejoice as his biggest franchise so far would now have the stage all for itself on June 3. The Akshay Kumar, Abhishek Bachchan, Riteish Deshmukh, Lisa Haydon, Jacqueline Fernandez and Nargis Fakhri film is the first multi-starrer of 2016 and is touted to be an ideal summer flick by director duo Sajid-Farhad. Moreover, with Akshay Kumar delivering a superhit even with an offbeat and niche like Airlift, all eyes are on how big does his out and out commercial Housefull 3 turns out to be.