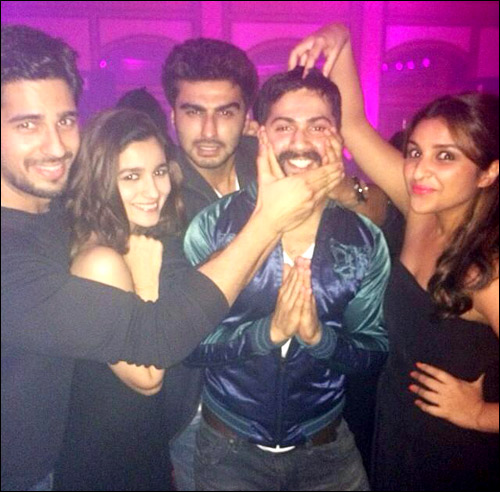 Parineeti Chopra, Alia Bhatt, Sidharth Malhotra, Arjun Kapoor and Varun Dhawan, have all been making headlines since their debuts in Bollywood. While Parineeti holds seniority over the others, thanks to her entry into the film industry first, the others too have now established themselves in Bollywood. Parineeti Chopra was recently spotted partying with the Student Of The Year gang and her former co-star Arjun Kapoor.

However, what's got out attention wasn't their apparent merry making but in fact, Varun Dhawan's look for his next film Badlapur. Though much of Varun's face has been hidden by Sidharth Malhotra and Arjun Kapoor's palms, his mustached look with close cropped hair certainly has given him a new avatar. Looks like the otherwise chocolate boy Varun Dhawan has gone rather rugged for his next.

Badlapur is an upcoming dark action-thriller directed by Sriram Raghavan and produced by Saif Ali Khan under the banner of Illuminati Films. Featuring Varun Dhawan, Nawazuddin Siddiqui, Huma Qureshi, Yami Gautam and Radhika Apte, the film, story revolves around violence and sex and will see Varun play a grey character. While Yami will play the role of Varun's wife, Huma will reprise the role of a prostitute.