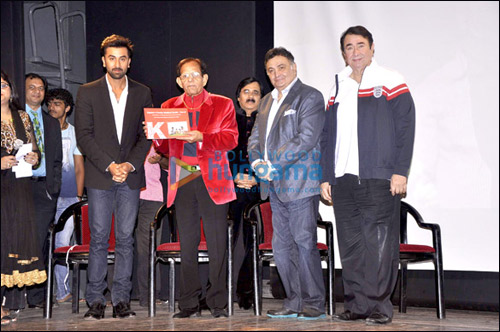 Ranbir Kapoor, along with his father Rishi Kapoor and uncle Randhir Kapoor came together to felicitate their family doctor and popular physician Dr. O P Kapoor at the Birla Matoshri Sabhaghar Hall, located at Bombay Hospital.


Dr. O P Kapoor, who just shares his surname with the renowned Bollywood Kapoor family, received this honour for mentoring many medical students over the past six decades. This felicitation was specially organized for Dr. Kapoor after he completed his 720th free lecture for young and aspiring doctors.


Apart from the three Kapoor Khandan men, Kanchan Desai, daughter of late Shammi Kapoor also attended the event. Talking about Dr. Kapoor's association with the Bollywood khandaan, Ranbir Kapoor claimed that he has grown up hearing only two popular names in his family, one is his grandfather the late Raj Kapoor and the other is Dr. O P Kapoor for his wonderful medical advice. Rishi Kapoor, on the other hand, was all praises for the doctor's dressing style.


Dr. Kapoor along with the Kapoor family launched the part two of the doctor's book titled Kapoor Family Medical Guide that advised people on preventing diseases and maintaining good health. The popular physician also mentioned that it was Raj Kapoor who gave him the idea to write the book.


Also the popular physician Dr. Kapoor expressed his love for Bollywood films and he even revealed that he has named his son Shashi and grandson Rishi.


Generations of Kapoor family have contributed immensely to Indian cinema and currently it is Ranbir Kapoor and his cousin Kareena Kapoor who are carrying the legacy forward in Bollywood. However, Rishi Kapoor and Randhir Kapoor too have resumed work in the world of Bollywood and were seen in several films.