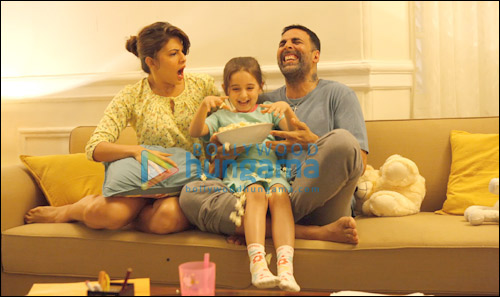 Last week's release Bajrangi Bhaijaan that has been doing well at the box office was the talk of the town, but the one actor who stood out was the 7 year old girl Harshaali Malhotra, who certainly tugged the audience's heart. Now we hear that the upcoming Brothers featuring Akshay Kumar, Sidharth Malhotra and Jacqueline Fernandez will also feature a young actor Naisha Khanna.

Naisha Khanna, who is all of six years, will be seen playing Akshay Kumar and Jacqueline Fernandez's daughter in Brothers. However this will not be the first time she has faced the cameras, with her first being an advert for Kidzee followed by a few TV serials. Commenting on Naisha being featured in Brothers, the kid's mother Mehek states that she took Naisha to Dharma eight months back and next thing she knew she was finalized for Brothers, which is a big break.

Simultaneously talking about her experience of shooting with Akshay and Jacqueline, Naisha adds, "The first scene I shot was the popcorn udanewala scene even after scene was cut I kept doing masti...Jackie aunty and Akshay uncle also played with me, and Jackie aunty gives me a lot of chocolates..." Further talking about the film and her watching it Naisha adds, "I love shooting; but I will miss the movie on August 14 as I have my school test."

Though Brothers is still a long way from releasing, Naisha has big plans, "Tiger Shroff is my favourite hero. I have seen Heropanti thousand times! I love the way Tiger dances. Jackie (Shroff) uncle has even given me Tiger's number and asked me to call him whenever I want to meet him. My other favourite actors are Akshay uncle and Salman uncle. Salman uncle has even given me the locket of Bajrangi Bhaijaan!"