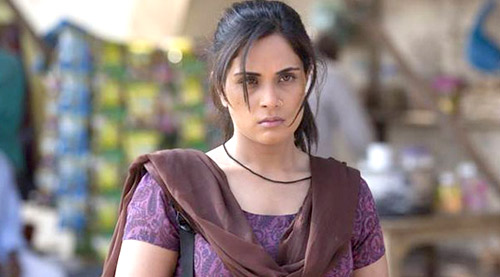 Varanasi....The land of the holy waters and... unholy deeds. Debutant director Neeraj Ghaywan mixes the stench of decadent corruption with the aroma of a newly awakening generation that wants to escape the stagnant spiritualism of a city whose holy waters are polluted beyond redemption.

And yet there is a magic to the city of Varanasi, an inescapable magic. As the goodhearted ticket seller at the Varanasi railway station points out to the film's tormented and hounded protagonist Devi (Richa Chadha, brilliant) more trains come to Varanasi than leave.

It is the kind of city that sucks you into its vortex and doesn't give you the freedom to depart unless it's by death. There are raw vivid scenes of burning ghats in the film whose scorching embers will singe the viewers' soul forever.

Masaan is not an easy film to ingest. It sucks you into its world of characters doomed by caste and ruined by wrong choices. The two main protagonists are played by Richa Chadha and newcomer Vickey Kaushal, actors whose deep link with the middleclass helps them to manoeuvre their characters in and out of thre trauma and anguish that the under-privileged classes are perpetually subjected to.

Hence in the shocking beginning-and the brilliant screenplay by Varun Grover and Ghaywan never leaves the shock element out of its purview till the very end-Devi (Chadha) is caught in a hotel room having sex.

Tauba! By succumbing to a basic need she subjects herself and her father (Sanjay Mishra, profoundly moving as a fast-fading river-bank priest and scholar) to the most crippling humiliation and blackmail by a bully cop (Bhagwan Tiwari, creepily real).

Richa plays Devi as a Fallen Woman with great dignity. Her scenes with her broken father moved me to tears, as it will move anyone who has ever been in a situation that has brought pain to a parent. Her journey and her encounter with a very strange and straightforward colleague (Pankaj Tripathy, splendid and memorable) are all brought together into a melancholic yet heartwarming saga of a small-town girl's humiliation and redemption.

The other story that runs parallel to Devi's saga is a tender and brutal love story where the caste system is smacked on its head before it proceeds to smack all of us in places where it hurts the most.

The young lovers played with an unspoilt naturalness by Vickey Kaushal and Shweta Tripathy, build an atmosphere of lulling gentleness around the plot that shatters to bits as the script moves to a zone of unexpected explosion.

Splintered lives shatter and mend in this penetrating portrait of lives lived on the edge compelling and devastating, Masaan marks the remarkable directorial debut of Neeraj Ghaywan. The screenplay is strewn with unforgettable moments. My favourite, if you insist, is the sequence where Chadha, haunted and haunting, arrives in Allahabad to meet her dead boyfriend's parents.

Here the camera reverently stays outside. We only hear the raised voices inside. It is enough to chill our soul.

In my other favourite sequence that actor par excellence Sanjay Mishra and a little boy share a moment of life in a hospital in a city where death is just a ghat away.

Avinash Arun's cinematography makes the cremation ground look lyrical. Poetry, let me tell you, is a source of constant mockery in the film. The young innocent lovers in the film begin to discover the poet in themselves when a freak accident sinks their ardour into the deep-end.

"Yeh dukh kam nahin hota," the young bereaved lover Deepak screams in a moment of unbearable anguish. I swear, at that moment I lost part of me to the film forever.

Never in recent times have I seen a film that rips such a gaping hole in our soul.

Masaan is a film that takes more away from viewers than perhaps we are willing to give away. It leaves us with no choice but to surrender our soul to its vision of a world where grief and bereavement are the incontrovertible home truths. The rest is transitory.