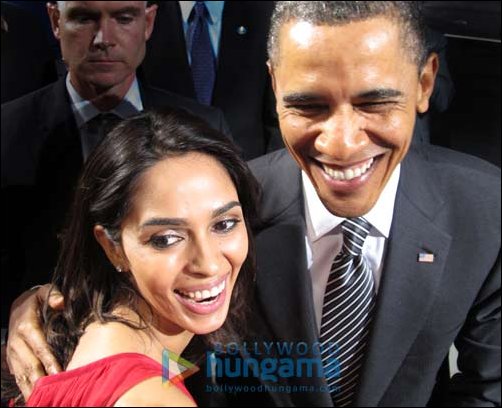 By now its common knowledge that Mallika Sherawat has been hobnobbing with some really big names in the US of A but none could get bigger than this. At a recent high tea event in Hollywood, Madame Sherawat bumped into none other than President Barack Obama.

Mallika spoke about how Los Angeles has become her second home and even about her much talked about film Politics Of Love aka Love, Barack. The film, it may be recalled is a rom-com inspired by the slew of publicly documented election love stories that sprung up during Obama's Presidential push. Obama was quite impressed and even told the actress to invite him for the premiere of the film.

It was Mallika's dream to meet the President since his historic first election. Besides, during her work on the new film she has learnt a lot about the man himself and U.S. politics. This was indeed a dream come true moment for the hottie from Haryana.