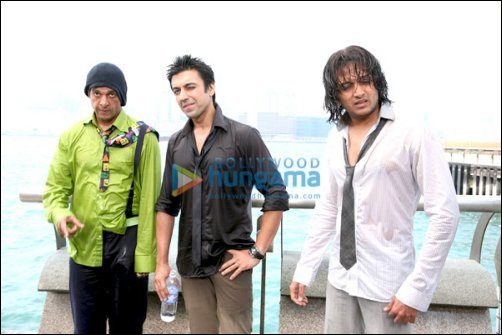 While recently filming in Macau, the cast of Double Dhamaal faced some serious water troubles. A particular sequence, which was shot near a port, required Arshad Warsi, Javed Jaffrey, Riteish Deshmukh, and Ashish Chowdhry to get completely drenched in water.

The only problem was that the water in that particular locality was highly dense and infected. The locals too swear by not going inside the water and if done, then they need to get vaccinated immediately.

The scene requirement was such that the boys had to be shown coming out of the water. Director Indra Kumar did not want to risk getting the actors skins exposed to that water and hence as a solution, the crew arranged for a large amount of bottled mineral water.

Well, if you have such a mad star cast, some 'Dhamaal' is surely expected on the sets!

Sajid Nadiadwala is all set to shoot…

EXCLUSIVE: “Rajkumar Hirani has got three…