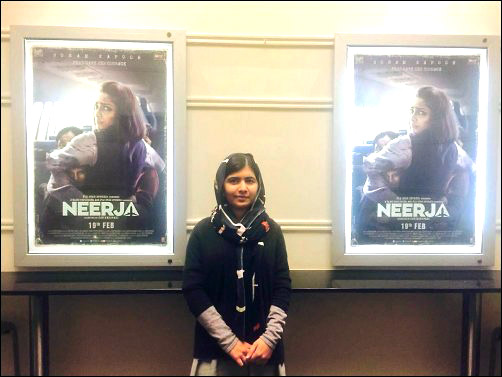 Sonam Kapoor has definitely struck gold with Neerja. The film that is based on a real life incident has grabbed the attention of several personalities even beyond Bollywood and the actress was proud to see a prominent social activist like Malala Yousafzai attending a special screening of Neerja.


The special screening of the film was organized in London which was attended by Malala and Sonam Kapoor took to Instagram to post an image of her saying, "Malala said 'I am stronger than fear' and for #Neerja 'fear gave her courage! Thank you #MalalaYousafzai for attending a private screening of #Neerja in London. I'm so glad you liked the film."


Based on the 1986 hijack in Karachi, Neerja is the story of the Ashok Chakra award recipient and flight attendant Neerja Bhanot who saved the lives of many including that of three children during the attack. Directed by Ram Madhvani and produced by Bling Unplugged along with Fox Star Studios, the film released on February 19.