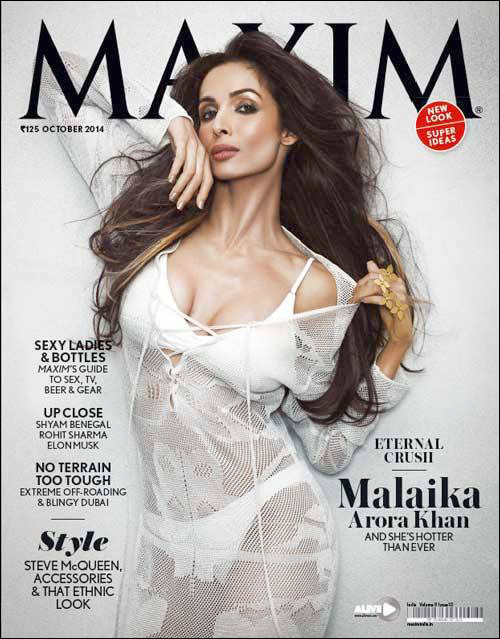 She may be a mother but that hasn't stopped Malaika Arora Khan from being tagged as one of the sexiest women Bollywood has ever seen. Acting has never been on the list for Malaika Arora Khan but her desi thumkas and item numbers remain to be evergreen chartbusters. And now after a long time, we once again get to see Malaika Arora Khan in a hot avatar for Maxim that will surely set the temperatures soaring high this October.

This month's edition features Malaika Arora Khan as the 'Hotter than ever' cover girl, clad in a white bikini and net kaftan. Adding to the oomph factor is the smoky eyes and dark lips with flower rings as the only accessory. Malaika Arora Khan, who is married to Arbaaz Khan, gained fame with songs like 'Chaiyya Chaiyya' (Dil Se) and 'Munni Badnaam' (Dabangg). She was last seen in Dabangg 2 and will now be seen in an item number for her husband Arbaaz Khan's next production Dolly Ki Doli which stars Sonam Kapoor, Pulkit Samrat, Rajkummar Rao and Varun Sharma. Malaika has also judged reality shows like 'India's Got Talent'.

The magazine also gives a sneak peek on the life of men who are at the top of the game which include veteran director Shyam Benegal, cricketer Rohit Sharma and American business tycoon Elon Musk.