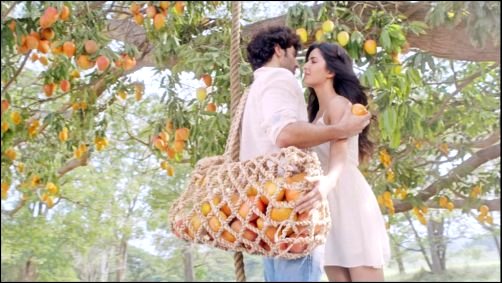 It seems that the Fitoor couple Aditya Roy Kapur and Katrina Kaif are already enjoying their share of attention though the release of their film is months away. Even before the first look of their film hits the web, we will get to see the chemistry between the two actors in the upcoming ad commercial for the mango drink brand Slice.


The mango drink brand which has Katrina Kaif as their ambassador has shot a new commercial with the actress and her co-star and here's a picture taken on the sets of the ad that has gone viral on the internet. The said picture has Katrina Kaif sporting a short white dress along with Aditya Roy Kapur wearing a matching colour shirt, with the two surrounded by mangoes.


Fitoor also starring Rekha, Aditi Rao Hydari, Talat Aziz, Lara Dutta, Ajay Devgn among others is the Indian adaptation of the Charles Dickens' classic Great Expectations. Produced by UTV and directed by Abhishek Kapoor, the film is slated to release on February 12, 2016.