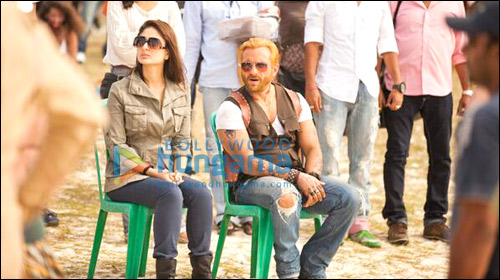 It was Saif who walked away with the fame and glory of India's first zom-com Go Goa Gone as he explored the unexplored genres of zombie films and comedy through his production and supporting him in this venture was his entire family.

Though wife Kareena Kapoor did not make any special appearance in the film, a picture of the actress is trending on Twitter where she was spotted accompanying her hubby Saif Ali Khan to the sets of this zombie venture. Saif, who was seen in a blonde avatar in the film, was chit chatting with wifey Kareena Kapoor who looked chic in her trendy jacket, denims and boots. While Kareena preferred to stay behind the camera, Saif's sister extended her support to her brother and beau Kunal Khemu through a small cameo in the film.