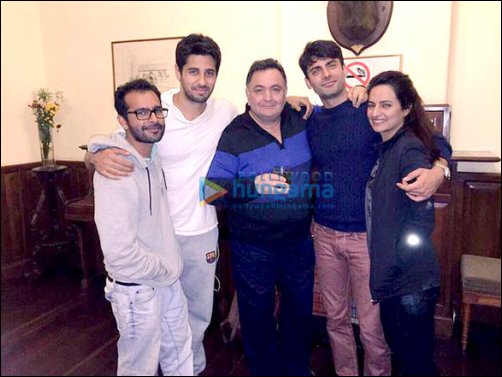 Readers may be well aware that the cast and crew of Kapoor & Sons are currently enjoying the chilly weather at Coonoor, away from the bustling streets of Mumbai. Now that the actors have been shooting there for quite some time, it seems that the team decided to take some time out to unwind.

After hectic shoot schedules, we spotted the boys that is director Shakun Batra, actors Sidharth Malhotra, Fawad Khan and Rishi Kapoor bonding with each other during a fun filled party night. Sharing the image on the micro blogging site, Rishi Kapoor tweeted about it saying, "Last night we celebrated #kapoorandsons Coonoor. Great guys to work with. Back in Mumbai for the day resume day after."

On the other hand, Sidharth Malhotra too posted the image on his Twitter handle saying, "With the Kapoor of #kapoorandsons fun night @shakunbatra @_fawadakhan_". However it seems that the leading lady of the film Alia Bhatt missed out on all the fun.

Kapoor & Sons is produced by Karan Johar under the banner Dharma Productions.