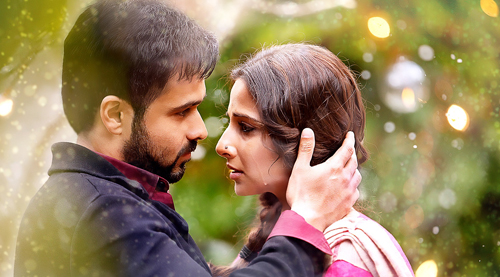 She was the queen of all she surveyed, until not too long ago. Then Vidya Balan's films started flopping. After

Ghanchakkar, Shaadi Ke Side Effects and Bobby Jasoos she seemed to be moving on the back-foot.

The trailer of her new film Hamaari Adhuri Kahani dispels all doubts about Vidya's emotive propensity. The handpicked scenes show her to

be at the peak of her histrionic abilities. Playing a brutalized housewife who finds solace outside marriage, Vidya Balan shakes you up as only

In the film, she plays producer Mahesh Bhatt's mother. And that's the first real-life character for this naturalistic actress... unless we believe

Hamaari Adhuri Kahaani allows her to express raw hurt and throbbing anger. It's a role designed for greatness.

Says producer Mahesh Bhatt, "Vidya plays my mother. In Vidya's eyes we see the same pain and longing of virah (separation) that Krishna

Adds Taran Adarsh, "With Mohit Suri in the director's seat one can be assured of an interesting plot premise and some riveting drama. Also, the

Says trade analyst Atul Mohan, "Hamaari Adhuri Kahani has to work big-time and I hope it does. Mohit Suri's has a track-record of

successes. After Aashiqui 2 and Ek Villain he is considered the most bankable director of successful musicals. Hamaari Adhuri

Kahani should rejuvenate the careers of Emraan Hashmi and Vidya Balan and also bring some smile to the producers the Bhatts and Fox Star."

Mahesh Bhatt gets poetic as he looks ahead at the release of this autobiographical tale. "Spring will be here very soon. Haven't you heard its

Overlooking the shabby performance of his last two productions Mahesh Bhatt says, "It's raining love at the turnstiles. When it rains it washes

the dust off all the yesteryear and makes everything sparkle. The world's response to the trailer of Hamaari Adhuri Kahani indicates it

will infuse a fresh surge of life to the careers of Vidya and Emraan. This true love story will make them glow."