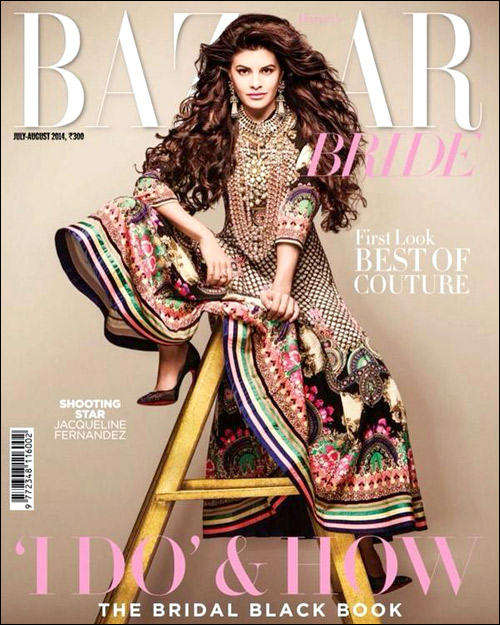 Jacqueline Fernandez is in high spirits with her career taking a drastic twist with the upcoming Salman Khan starrer Kick. With all eyes set on the film's release, Jacqueline Fernandez has something to look forward this week. Though this is one of the biggest releases that the actress has bagged after entering Bollywood, being a former beauty queen, she is surely been one of the favourite cover girls. This time around, the actress dons the attire of a bride in Harper's Bazaar Bride's July edition.

In this Black Book of 'I Do and How', we will get a sneak peek into the life of the 'Shooting Star - Jacqueline Fernandez'. The actress discovered a new journey of her life with Bollywood. Starting her career as a reporter, Jacqueline Fernandez climbed the ladder of success after she was crowned Miss Sri Lanka Universe in 2006. After making a rather forgettable debut, Jacqueline Fernandez slowly yet steadily treaded her path in the film industry and established herself as an actress with films like Murder 2 and Race 2.

Apart from some secrets of Jacqueline's life, the magazine also features some new and unique couture collection for all the to-be-brides.