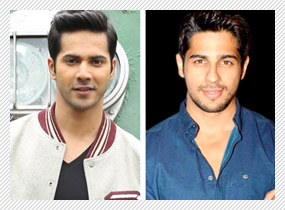 It's been two years since Student Of The Year launched Varun Dhawan and Sidharth Malhotra. The two continue to stay connected and look into each other's works keenly.

For his role of the goofy colloquial Delhi boy in Shashank Khaitan's Humpty Sharma Ki Dulhania Varun reveals he borrowed generously from his buddy's Delhi language.

"Yes, a lot of slang words for my character Humpty are what I've picked up from Sidharth. He is a Dilli ka ladka. He may come across as too sophisticated to use colloquial lingo. But when he is with his close friends he lets himself go. That's when the Delhi side in his personality emerges. I've spent lots of time with him. And I've seen that side of him. So I was able to use it for my character."

Interestingly, Varun and Malhotra both have a hit each within a fortnight of one another.

Varun says he is shy of discussing his relationships in public. "It could be anyone or any relationship. I think personal relationships are just that. Personal. But yeah, Sidharth and I are friends. I know him very well and care for him a lot. We are in touch regularly."

Varun says he called up Sidharth to congratulate him for the success of Ek Villain. "I am very very happy for Sidharth. He had shown me the film before its release and I had told him the film was a sure-shot winner. When he saw Humpty... he called me up. When he saw my Delhi-based character he immediately recognized things I had picked up from him."