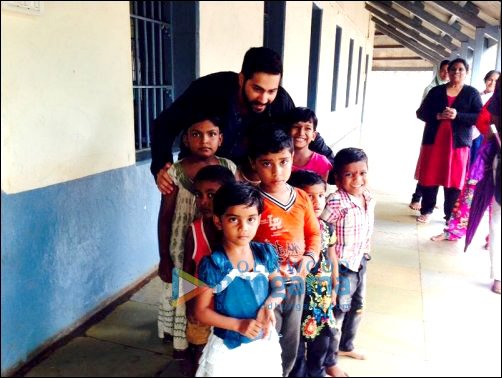 It seems that Bollywood's latest chocolate hero Varun Dhawan, who, after his last film Humpty Sharma Ki Dulhania, seems like in no mood to get 'stereotyped' playing the typical chocolate guy. Maybe that explains the reason as to why this Varun Dhawan has agreed to do a thriller named Badlapur, that's being directed by Sriram Raghavan, whose last Agent Vinod garnered mixed reactions at the box office.

Varun Dhawan, on his part, seems to be going all out to get into the character of the role that he is playing in this film. Recently, he shot in Nashik jail with over 2500 real-life inmates for a scene from the film. Reports have it that the said scene was shot over a period of two full days. This scene is about Varun Dhawan's character meeting some of the women convicts who have been imprisoned in the jail. It's also said that Varun, who was initially a bit nervous at the very thought of facing real life killers and criminals, was totally taken aback when he got to know that they (the convicts) live in their cells with their children, who are below the age of five years. If the buzz is to be believed, then, Varun Dhawan has even shot in a hospital morgue with real life corpses for the film.

This is not the first time that when Varun has got in 'touch with reality'. Readers may remember that even in his last release (Humpty Sharma Ki Dulhania), there was a requirement of a scene which wanted him to get drunk. In an attempt to perfect the scene, the otherwise teetotaler Varun, actually got drunk at ... hold your breath... 4 in the morning, as that's when the said scene was being shot!