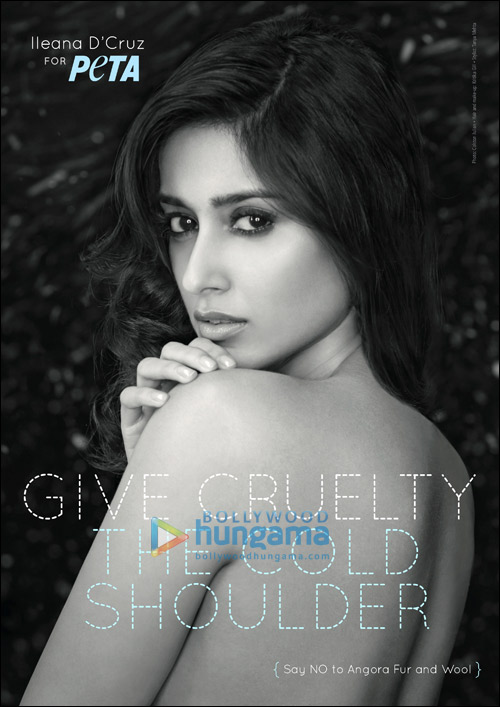 If looks could kill, Ileana D'Cruz's steely gaze would have angora fur and wool farmers trembling in their boots. The Bollywood star goes backless in a brand-new ad for People for the Ethical Treatment of Animals (PETA) India launched in association with Lakme Fashion Week (LFW) that urges fans to "[g]ive cruelty the cold shoulder. Say NO to angora fur and wool".

The sexy ad was shot by ace photographer Colston Julian. The launch was an extension of a joint initiative between PETA and LFW called 'ExtraVEGANza' which celebrated vegan (non-animal) leather, vegan fur and other modern and humane materials through an informative stall during the recent fashion week held at Palladium Hotel in Mumbai. Saket Dhankar, Head of Fashion, IMG Reliance, has invited PETA to join with LFW on various animal protection initiatives in recent years.

"Rabbits are treated really violently....Because of that violent nature of pulling out the fur while the animal is still alive, it goes into terrible shock and trauma", says Ileana. "Angora can be sold as fur as well as wool. And you find it in sweaters, scarves. Check the labels to see what it's made of. And when you do find that it is made of angora fur, I would really request you to stop this by not buying stuff like this."