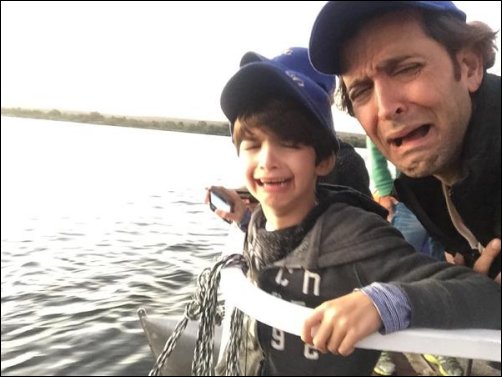 It's quite disappointing for Hrithik Roshan fans, since the actor will not be seen on the silver screen in 2015. While his upcoming period drama Mohenjo Daro is still in the production stage, the actor has also been spending some quality time with his kids Hrehaan and Hridhaan.


In fact, post his split with wife Sussanne Khan, Hrithik Roshan has been taking a lot of vacations with his kids and we must say that his trips with them are often adventurous. This time around, Hrithik Roshan decided to explore Africa along with Hrehaan and Hridhaan. In fact, talking about his recent expedition, the actor shared a picture with his sons whilst they were on a boat trying to hunt down crocodiles. Posting about it, the doting father also wrote, "Real? or faking it? ... (Hint- He's doing it better than me.) #crocodilehunting #AmazingAfrica"


On the other hand, Hrithik Roshan's Mohenjo Daro is a period love story and he will be paired with model turned actress Pooja Hegde in it. Directed by Ashutosh Gowariker, the film is slated to release on August 12, 2016.