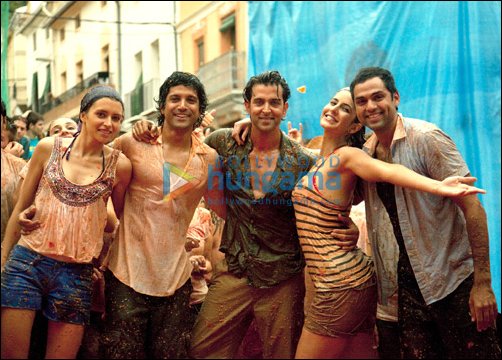 Zindagi Na Milegi Dobara, is one of the biggest releases of this summer. The film is a complete joyride with three friends taking off on a fun filled road trip.

Just as the nation is gearing up for the riot of colours with the festival of Holi, Zindagi Na Milegi Dobara brings the famous Tomatina festival of Spain. The Spanish celebrate Tomatina every year by throwing ripened tomatoes on each other. Zoya Akhtar has put together one of the best looking cast who shares great chemistry with each other. This film has an elaborate scene, with the four stars, Hrithik Roshan, Katrina Kaif, Farhan Akhtar and Abhay Deol taking part in the fun Tomatina festival.

The Tomatina was re-created for the shoot of Zindagi Na Milegi Dobara. It was shot in Bunyol, Valencia, Spain. Almost 16 tons on tomatoes were used for the shoot and they were flown in from Portugal. Apparently, the import of tomatoes itself cost the producers a good Rs. 1 crore!

Talking about the shooting experience for the sequence, director Zoya Akhtar says, "Tomatina in Spain is a festival closest to our Holi. They play with tomatoes and the world turns red for the day. The energy is infectious and the scene is a visual treat. We had a blast shooting this sequence but it was not all rosy. It was a logistical nightmare for the producer. We shot in the same location where the festival actually takes place and we had to shut the town down. The residents of Bunyol were extremely sweet and in turn they celebrated Tomatina twice last year... once for Spain and once for India."