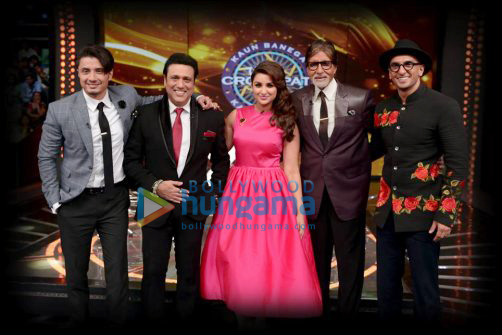 They say that 'All is not well, till the time it doesn't end well'. Well, this adage couldn't have been truer than in the case of Amitabh Bachchan's widely watched reality game show 'Kaun Banega Crorepati'.

While this season of the show (season 8) is just about to end, the upcoming episode will have stars like Govinda, Ranveer Singh, Parineeti Chopra & Ali Zafar to come on the show! The last episode of the show will be aired on November 13 and present alongside the Big B will be the aforementioned stars, who had come to promote their film Kill Dil.

Interestingly, Govinda and Amitabh Bachchan who were last seen together on the big screen in David Dhawan's comedy Bade Miyan Chote Miyan in 1998. The two stars will be seen together after a long gap.


Also, Ranveer Singh is seen hiding his new bald look from the film Bajirao Mastani with his hat.

If the smiles seen on the faces of these stars are anything to go by, then, it seems like all of them had a gala of a time shooting the episode.