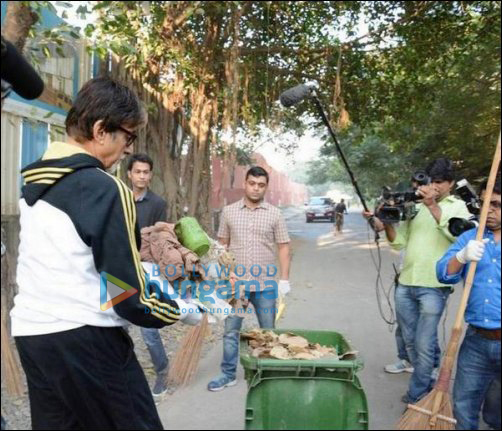 Actors like Salman Khan and Hrithik Roshan got to the streets and actively participated in the new cleanliness drive initiated by our Prime Minister Narendra Modi. The actors were spotted on the streets of Mumbai helping the common man clean the dirty areas and now, similarly it was legendary actor Amitabh Bachchan's turn to extend his support towards this initiative.

Amitabh Bachchan was spotted in a jumpsuit, participating in the Swacch Bharat Abhiyaan and helping the cleaners in the vicinity. While his ongoing quiz show Kaun Banega Crorepati's eight season is coming to an end, Bachchan, prior to the shoot schedule, decided to get involved in the cleanliness drive. In fact, the evergreen star posted about participating in it before he put up the pictures on his Twitter handle. "And before the finale .. it was 'Swach Bharat Abhiyaan' .. went on the streets and broomed and collected dirt to clean up the place."

However, post the campaign, the actor did not waste any time in giving us a glimpse of his support towards the initiative and posted about the experience saying, "The 'Swach Bharat Abhiyaan' .. personalised !! Let everyone deserve to be involved.."

Amitabh Bachchan has been shooting for the Bejoy Nambiar directorial titled Wazir which also stars Farhan Akhtar and Aditi Rao Hydari in lead roles. Apart from that, he will also be seen in his friend and filmmaker R. Balki's film Shamitabh where he will be starring opposite Dhanush and Akshara Haasan.