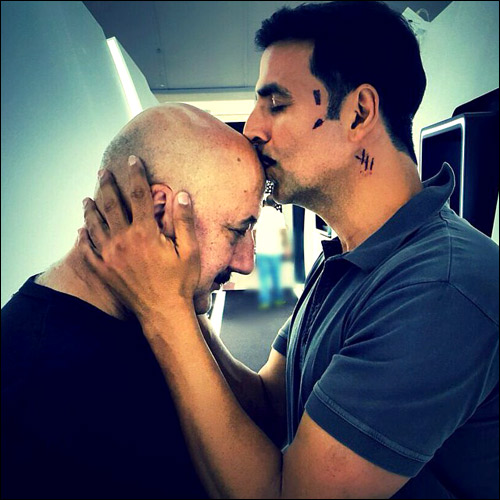 We have often seen Akshay Kumar kicking the bad guys in films but there is soft and tender side to the actor and he expresses them only amidst loved ones. Akshay who has been shooting for films constantly, has wrapped up the shoot of yet another film Baby and on the last day of shoot, the action king got emotional during the shoot.

Akshay Kumar, Anupam Kher and filmmaker Neeraj Pandey came together once again for the thriller Baby after their last film Special 26 touched the hearts of many. Travelling across continents with the crew, Akshay Kumar seems to have developed a bond with them and the actor was left teary eyed on the last day of the schedule of the film. Posting this picture on his Facebook page, Akshay Kumar wrote about it saying, "Last day of shooting of #Baby. We are sad another Gr8 Neeraj Pandey adventure has come 2 an end. Till next time X."

Produced by T-Series in association with Krishan Kumar and Shital Bhatia, Baby has been extensively shot across Abu Dhabi, Istanbul, Kathmandu, Oman, Turkey as well as in India. The film also stars Tapsee Pannu, Rana Daggubati, Danny Denzongpa, Kay Kay Menon and Madhurima Tuli and it is slated to release on January 23, 2015.