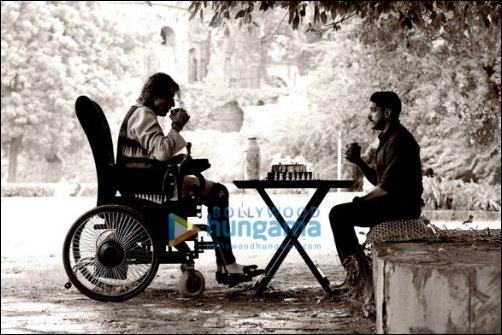 Earlier we had reported that Farhan Akhtar would be teaming up with Amitabh Bachchan for the first time in Bejoy Nambiar's film Do. Later we gave surfers a peak at a reading session the two lead actors had with producer Vidhu Vinod Chopra and Aditi Rao Hydari who will be playing the female lead.


This week Amitabh Bachchan posted the first image from the film on his facebook page, featuring Farhan and himself. The image shows Bachchan's character on a wheel chair playing a leisurely game of chess with Farhan Akhtar over some tea.


Do that went on floors at the end of September, will show Amitabh Bachchan playing the role of an ailing, bed ridden chess-master.