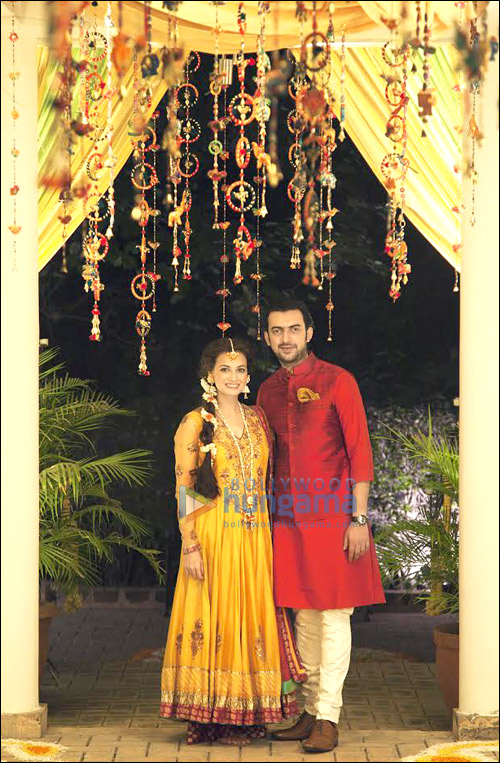 Dia Mirza has never had shied away from the media while talking about her wedding ceremony. Just a day ago, the actress expressed her excitement about the sangeet ceremony where she is all set to perform a special number for her to-be husband Sahil Sangha and his family which will be held today. However, the big fat Indian wedding celebrations have already started and the actress gave a glimpse of the Mehendi ceremony which was held yesterday.

Dia Mirza took to her Twitter handle to post a picture of the ceremony and posed for it along with her beau and filmmaker Sahil Sangha. The actress was dressed in a beautiful golden anarkali with chanderi work with the contrast shade of purple as dupatta designed by Ritu Kumar. On the other hand, adding some more brightness to the ceremony was the dapper Sahil Sangha who donned a red kurta and matching bandgala Nehru jacket. Dia expressed the joy of this moment by sharing it with her fans on her Twitter handle saying, "With my happiness :) thank you to all those who have conveyed such warm messages here. Sahil and I are grateful."

Dia Mirza is really thrilled about her three day wedding and she has been constantly updating her fans about the preparations. In fact, just a few hours before the Mehendi ceremony, the actress tweeted about it saying, "Mehendi hain rachne waali :)"

Dia Mirza and Sahil Sangha were supposed to tie the knot in 2013. However due to various reasons, the duo had decided to postpone the wedding. However, the final date was announced by the actress after Sahil's romantic proposal in New York while the two were attending an award ceremony.

Dia and Sahil will be tying the knot on Saturday, that is, October 18.