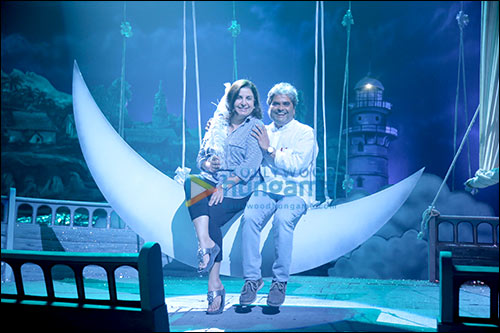 Set during the Second World War, Vishal Bhardwaj is leaving no stone unturned to take us back to that era when the British rule was very much a part of our lives in Rangoon. And this time around, choreographer turned filmmaker Farah Khan too decided to walk hand in hand with the filmmaker's vision and has taken all the effort to recreate the period for a song that will be choreographed by her titled 'Ek Dooni Do'.


Resembling the black and white era of the 40s, the song is said to be picturized on the second lead of the film Shriswara who was seen in films like D-Day and Singham Returns. The said song has been styled as per the trend of 40s and in Cuckoo style which was popular during those days. Vishal, on the other hand, revealed that the entire song was to be shot in one take and despite rehearsing it for four days it apparently took over 28 takes for them to complete the song. 'Ek Dooni Do' is said to be choreographed in an elaborate manner with over 100 junior artists, back up dancers along with fairies, the moon, streets of Mumbai and even a backdrop of a casino representing the 40s. Farah also mentioned that this is one of the songs that she had promised Sajid Nadiadwala (the producer of the film) that she will do it for free.


However this is not the only song she will be doing for Vishal. Yet another track from the film which is picturized on the film's lead pair Shahid Kapoor and Kangna Ranaut in a train will be choreographed by her. Also starring Saif Ali Khan, Rangoon is a romantic drama that is slated to release on September 30, 2016.