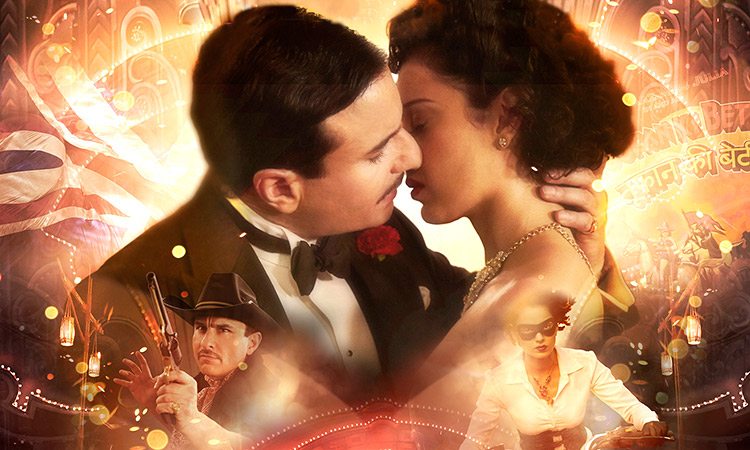 There’s something about World War II that fascinates me. Perhaps, it has a lot to do with my fondness for the long-gone era. However, what I find odd is that whenever we -- like-minded friends who are enthralled by history -- discuss World War II or Adolf Hitler’s aggression/ambitions, the conversation *always* veers towards the American and European perspective.

Hollywood’s fascination for World War II is equally evident as you recall several brilliant and a number of okay-ish movies dedicated to World War II. Vishal Bhardwaj also sets RANGOON during that era, when India was still under British rule. But, let me clarify, this is no war film. Vishal uses the World War II template, but narrates an enchanting love story that entwines conflict, deceit, politics and of course, history.

Irrespective of how his films are received by the audience or reviewed by critics, you cannot deny the fact that Vishal knows the craft well. RANGOON too has the by-now-famous stamp of an accomplished storyteller and you realize this fact during the intense moments in the narrative. Sure, RANGOON has its share of flaws, but there’s no denying that several episodes stay with you much after the screening has concluded.

RANGOON is a World War II drama primarily revolving around three characters -- Rusi Billimoria [Saif Ali Khan], an actor who now produces his own films… Julia [Kangna Ranaut], an actress who stars in Rusi’s movies. Incidentally, Rusi is also her mentor and lover… Nawab Malik [Shahid Kapoor], a soldier with the armed forces.

Julia is asked to visit the jungles at the India-Burma border to entertain the English and Indian troops. In the midst of battles and betrayals, Julia falls in love with Nawab and learns some truths about the dream of Indian independence. Battlelines are drawn when Rusi learns of the torrid love affair.

Does the plot summary sound familiar? Does the story give the feeling of déjà vu? On paper, the plot of RANGOON may appear oft-repeated, a story we have visited on the Hindi screen innumerable times in the past [lost count, haven’t we?]. But scratch the exterior and you realize that Vishal and his team of writers [Matthew Robbins, Sabrina Dhawan and Vishal himself] not only talk of matters of the heart, but also relationships and love blossoming amidst guns and thorns.

Frankly, RANGOON is a complex film and it does take time to dissolve oneself wholly in the world of Rusi, Julia and Nawab. You don’t take to the film instantaneously, although you are drawn by the look and feel of 1940s India and are completely smitten by the old-world charm that Vishal painstakingly recreates at the commencement of the movie itself.

The story moves constantly in the first hour, transporting you from the studios of Mumbai to the jungles at the Indo-Burma border. A few stand out moments during the course of the first half are magical indeed, but the narrative isn’t cohesive enough for you to go ga-ga over it. Thankfully, there’s much meat in the second half. In fact, Vishal reserves the best for the post-interval portions, when Rusi, Julia and Nawab’s worlds collide. There’s turbulence in their lives and that, for me, is the film’s biggest strength. The myriad emotions [love, jealousy, betrayal], the sequence of events in the second half, the nail-biting finale… Vishal keeps his storytelling simplistic, yet the impact is power-packed and compelling.

There are shortcomings along the way. To start with, the writing in the first half is erratic... Editing could’ve been crisper… Also, the songs aren’t catchy [except ‘Yeh Ishq Hai’ and ‘Bloody Hell’]. Now this is surprising because Vishal is the music composer as well. Besides, the film could’ve done without a song or two… A few sequences in the second half look unreal [Julia gets into the costume, jumps on the train and saves Nawab -- it’s too sudden].

Technically, Vishal keeps it simple so that technique doesn’t overpower content. While the soundtrack is ordinary, the background score [Vishal] is electrifying. The usage of a particular sound during the tension-filled moments lingers in your memory. Dialogue [Vishal, again] add weight to the proceedings. Would like to single out the sequence between Nawab and Julia, when the latter gets to know a shocking aspect of Nawab’s life.

Recreating the long-gone period is a Herculean task and the endeavor goes for a toss if the DoP doesn’t do justice to the efforts. Not in this case! RANGOON is embellished with remarkable cinematography [DoP: Pankaj Kumar]. Additionally, the locales of Arunachal Pradesh are breathtakingly beautiful. 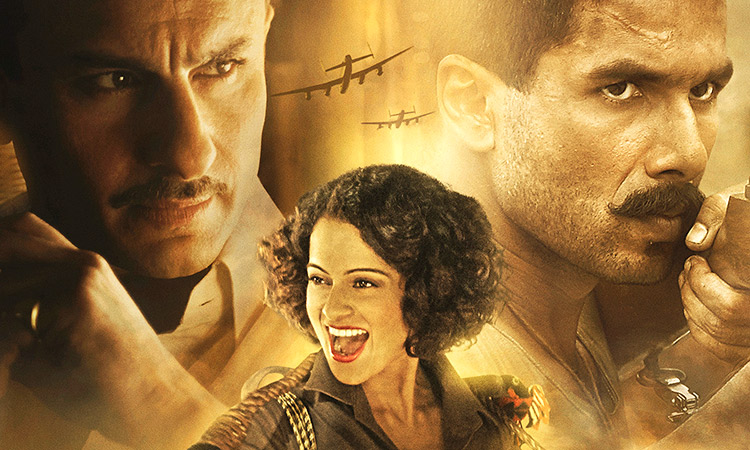 The principal cast brings Vishal’s vision to life. Much has been said and written about the casting of RANGOON, but, to give the credit where it’s due, casting Saif as the suave film producer and Shahid as the duty-bound soldier is a masterstroke. The dramatic altercations between Saif and Shahid are subtle, not overdramatic. There’s not much of Saif in the first half, but the actor leaves his footprints when he re-enters the story at the interval point. From that point onwards, right till the conclusion, Saif is top notch, handling his part with precision.

Shahid gets a meatier part and he takes charge of the responsibility bestowed upon him. He’s in terrific form. The scene-stealer, frankly. Although the year has just commenced and there’s so much to look forward to in the forthcoming months, I am sure, Shahid’s exemplary act will stay with you for a long, long time and the act will be a frontrunner at the awards next year.

Kangna portrays the lifeline of Rusi and Nawab with commanding authority. She owns every sequence she appears in, she makes every moment come alive with a memorable act. What’s noteworthy is that Kangna is effortless and stands tall in the most challenging sequences.

On the whole, RANGOON is an epic love saga with strong emotional quotient, riveting second hour and nail-biting finale. Watch it for its layered plot, serpentine twists, proficient storytelling and bravura performances. A content-driven film that’s worth a recommendation!

it one of the horrible movie ever i must have watched. don't waste time on this one. disappointed…

Lovely recreation of the INA effort to free ourcountry from the British yoke. Well…