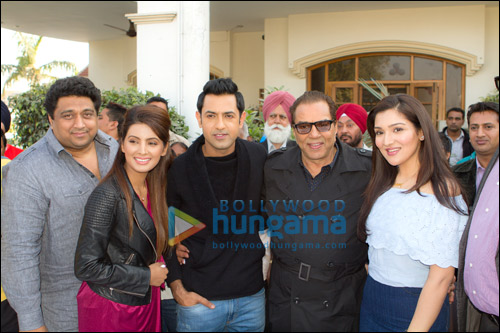 Superstar Dharmendra had a working 79th birthday but he surely didn't regret it so because he seems to have had a fun filled bash on the sets of his upcoming film Second Hand Husband.


The cast of the film which includes Punjabi superstar Gippy Grewal, Narmmadaa Ahuja, daughter of Govinda, Geeta Basra and the director Smeep Kang organized for a grand bash on the sets of their film. Second Hand Husband is currently being shot in Punjab and they surely made this memorable for Dharmendra despite the fact that he was away from his family during this occasion. In fact, the team even arranged for a special birthday cake and surprised the veteran actor in the middle of the shoot. Dharmendra was obviously very delighted with the love and affection being showered on him by his young co-stars.

Second Hand Husband will not only see our beloved Dharam Paaji in a quintessential Punjabi role but it will also mark the debut of Govinda's daughter Narmada Ahuja in Bollywood. On the other hand, Geeta Basra who is known for her bold acts in films, will be seen as the traditional Punjabi kudi in this film. Apart from them, ex Bigg Boss contestant Deepshika will also play a prominent role opposite Dharmendra in this film.