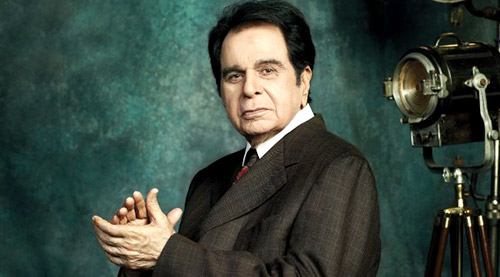 Do awards have any meaning for you any longer?

Oh yes, they do! When you hold it in your hand or keep it next to you on the bed when you go to sleep, the trophy is at angible reminder of your past. Mere paas jab aata hai, main muskura ta hoon. Because I know that those who've given it to me and those who will get to know about them will think of me for a while.Like you did.

Cinema buffs think of you all the time. There's no Indian cinema without Dilip Kumar.

That's kind of you. My wife Saira keeps reminding me of all the people I've to thank for calling and congratulating me. She's very very busy, you know.

She has to be, she has to look after the biggest and most famous baby in India.

Han, yeh aapne bilkul sach kaha. I'm grateful to God forgiving me such a girl as a friend and companion who has given everything to me. I'm indebted to her in every possible way. When any one calls, when anything needs my attention, Saira makes a note. There's no aspect of my life that she doesn't touch with her generosity.

Would it be possible to be the person you are with out her contribution?

No,not possible. Saira keeps me in touch with what's going on around me. The children of yesterday have grown up. Some know how to conduct themselves well, others not so well. I've to deal with both kinds. Sairaji helps me to sift through all the people I've to connect with, almost like a woman who separates the wheat from the chaff.

She's more like a mother to you than wife now.

Oh yes. She has a much higher designation than a wife in my life. Sometimes she gets angry with or without reason. Even now she's monitoring and observing me. She's constantly making mere pay my debts to my audience and well wishers.

How do you react when Amitabh Bachchan says he regrets you not winning an award for Ganga Jamuna?

I feel touched. At that time when we made Ganga Jamuna I toiled very hard.But I didn't know the film would reach so far. Even today people are singing those songs from the film.

Have you ever thought of writing an autobiography?

Yes, I have thought of this. And I've written it all down. Saira has all the papers.She's collaborating with her journalist-friend Udaya Tara Nayar to put it together. I told Saira to get someone who assembles my life story with some concern rather than disinterest. I want it to come out sounding positive and saying good things in goods words about the people I've known.

Have you told the absolute truth about your life in the book?

Not everything. That isn't possible. There're so many and varied experiences. And I haven't forgotten any of them. Mujhe sab baatein yaad rehti hai. I remember acting drunk in dirty clothes, staggering by a garbage can for Devdas.


Were you really drunk in Devdas?

No! That would make it impossible to work, bhai! As for my biography,even you won't be able to tell the whole truth about your life. Why do you want me to tire my self talking about it? When the book is published I'll certainly send you a copy.

Who's the most unforgettable heroine you worked with besides Sairaji?

(ponders for minutes) I could name anyone. But that doesn't seem right.

Would it be Madhubala, Meena Kumari, Nargis?

(laughs) How easy it is for you to rattle off those names. It isn't that easy for me.

They were all memorable in their own way, weren't they?

Not all. Not at all.There were some who were uncaring and worthyâ€¦they were hard to work with. Even today I feel uncomfortable talking about them.Yes there were some co-stars in whom there was a lack of civility. Luckily I had reached a position where they couldn't misbehave with me.

What advice for today's film fraternity?

They need to invest their emotions wisely. Even I made many mistakes.

You haven't been seen on screen for a long time?

I can't see a subject of substance of which I'd like to be part of.