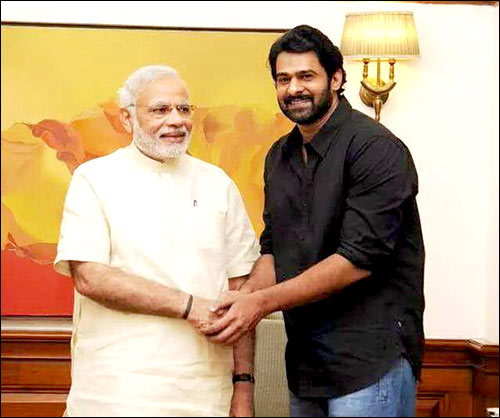 S.S. Rajamouli's magnum opus Bahubali that released three weeks ago has been the talk of the town, thanks to its story line and most of all, its impressive VFX. While on one hand the film has been doing extremely well at the box office, on the other, the lead actor Prabhas has been receiving accolades from one and all.


The latest is that Prime Minister Narendra Modi took time out to meet the actor. Posting an image of their meeting on his facebook page, Prabhas added, "It was a privilege meeting our honourable Prime Minister, Narendra Modi Ji. We spent much time discussing Bahubali and I suggested to watch it. He said he's extremely busy but will watch it if and when he gets the time. Hope he enjoys the film."


Bahubali that released earlier this month is a two part saga with the second part scheduled to hit screens next year.

Prabhas is the only PAN-INDIA superstar at…