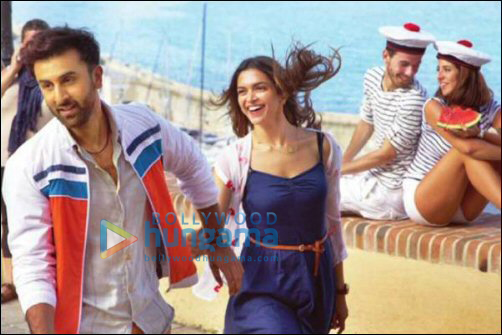 Deepika Padukone has had a great start to 2015, since her last film Piku garnered critical and mass acclaim. On the other hand, Ranbir Kapoor has been lying low post the

Bombay Velvet debacle. However, fans of this onscreen couple are eagerly waiting for their upcoming film Tamasha, a love story directed by Imtiaz Ali.

With expectations high from the makers of Jab We Met and Love Aaj Kal, Tamasha has been in news for more than a year and we at Bollywood Hungama have previously given many

glimpses of the film. The film which has been shot in varied locations like France, Paris and Shimla has Ranbir Kapoor playing the role of a nomad along with Deepika Padukone whose character too

loves to explore and travel. Previously we had reported that the two were shooting for a dance sequence in Croatia, Europe. While many pictures from the sets of the film have gone viral, here is

yet another one from the song sequence shot abroad, that has gone viral. In fact, Tamasha has been trending on a lot of social networking sets, where fans have been requesting the makers to

release an official first look of the film.

Produced by Sajid Nadiadwala in association with Disney UTV, Tamasha is slated to release on November 27.