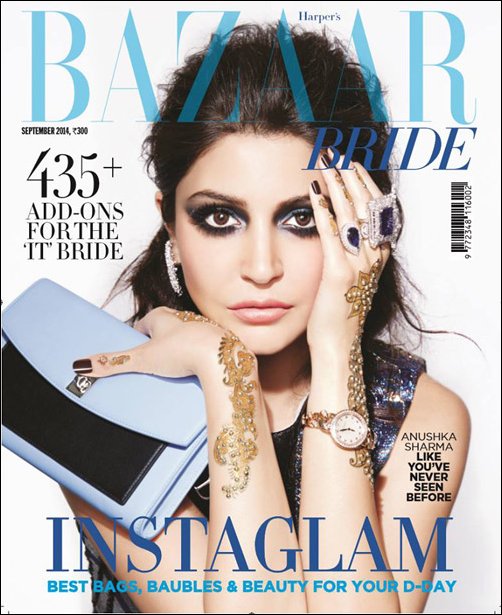 We haven't really got a glimpse of Anushka Sharma since after her last film Matru Ki Bijlee Ka Mandola which released in early 2013. However, 2014 has a lot more in store for the actress considering that she plays an integral role in the Aamir Khan starrer PK. Though she has stayed aloof from the silver screen of late, Anushka Sharma recently featured as the cover girl for the latest September edition of Harper's Bazaar Bride.


Styled in an out of the box avatar, Anushka Sharma represented the new gothic look of a bride in a top from Christian Dior Pre Fall 2014 collection. Adding to it, were the rings from Popley Eternal, earrings from Anmol Jewellers, a Bvlgari watch and blue Dior Clutch which gave appropriate finishing touches to this unconventional look. With the trend of brides opting for traditional outfits with a twist, this look of the actress is a welcome change. Keeping up with the theme of the gothic bride, Anushka Sharma's make-up also consisted of dark smoky eyes, nude lips and black nail paint. This edition also promises to reveal a new side of the actress as she talks about her journey and shares some personal secrets in the interview - 'Anushka Sharma Like You've Never Seen Before'


Anushka Sharma, who made her debut with the Shah Rukh Khan starrer Rab Ne Bana Di Jodi, will also be seen in Anurag Kashyap's magnum opus Bombay Velvet and her also her own production NH10.


Apart from this, this bridal edition of Harper's Bazaar will also feature articles on glamorous bags, baubles and other accessories that will accentuate the beauty of a woman.