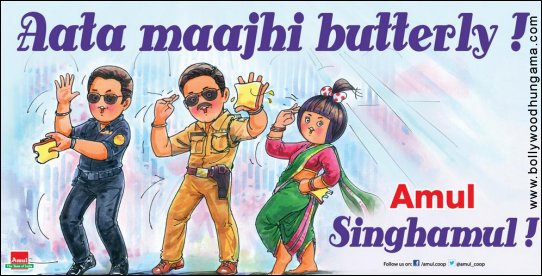 The Rohit Shetty directed Ajay Devgn - Kareena Kapoor starrer Singham Returns that released a while back did rather well at the box office. Being a sequel to the previously released Singham, the film fared much better with collections surpassing its predecessor by a wide margin.


However, it was the popular track 'Aata Maaji Satakli' by rapper Yo Yo Honey Singh that stole the show. Now weeks after the release of the film Amul, known for their topical advertisements, capitalizes on the same with a new creative. With a tag line that reads, 'Aata maajhi butterly! Singhamul!'.