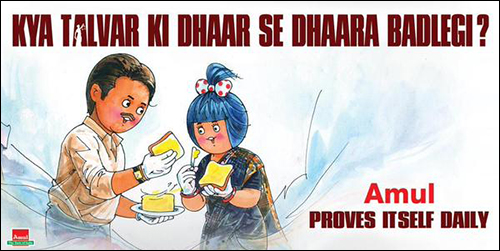 While interesting topics often become inspirations for many successful commercials, Amul has been running this campaign of topical ads for quite some time now. This time around, it is about the film Talvar which was inspired by the most controversial criminal conspiracy of the double murder case of Aarushi Talwar and Hemraj.

Directed by Meghna Gulzar, the film was inspired by the real life case and throws light on the irresponsibility, cruelty, hypocrisy and selfishness of a corrupt police nexus in the Indian capital and has inspired many of them to re-campaign for the case that was closed couple of years ago. Amul's ad too uses this as the premise of their poster saying 'Kya Talvar ki Dhaar Se Dhaara Badlegi' (Will the sharpness of the sword change the public notion) along with the tagline, 'Amul Proves Itself Daily'.