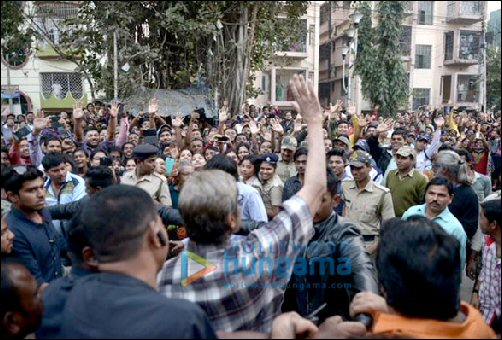 For the past few months, we have been getting several glimpses of Sujoy Ghosh's upcoming thriller Te3N, directed by Ribhu Dasgupta. And now, Amitabh Bachchan who has been shooting for the film in Kolkata announced that the film has finally been wrapped up on social media.

Amitabh Bachchan who is quite active on social networking sites recently took to Twitter to share his emotions attached towards the film and how difficult it was to part ways with the team and Kolkata. He said, "Wrap on film 'TE3N' ! Withdrawal symptoms and most difficult to leave them, you see in picture !! TYK : Thank You Kolkata !!!" The megastar also described about the 'withdrawal' symptoms on his blog saying, "The withdrawal symptoms predominated at the closing of the 'last shot' with the unit .. as is wont .. and the disappearance from the love of the Kolkatans is truly the pain greater than any other .. how can one ever repay this".


Te3N also stars Nawazuddin Siddiqui in a prominent role along with Vidya Balan in an extended cameo.