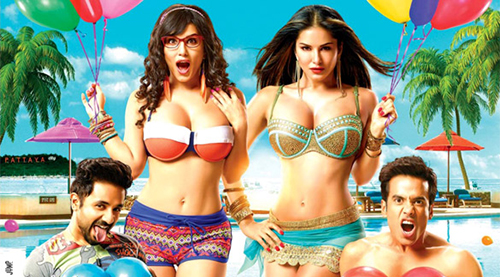 Mastizaade which is the second vex, sorry, sex comedy in a week left me puzzled, baffled flummoxed and not the least aroused.

There were many questions that begged to be answered, the most crucial of them being... How can the luscious Ms. Leone be shown to be lusting after, of all people, Tusshar (who, by the way, has dropped the Kapoor from the credit titles).

Suspension of disbelief ki bhi hadd hoti hai. But sorry, are we talking about limits of disbelief in a film like this where two guys make ad films for living and spend all their waking hours sleeping with women of various shapes and sizes. So exacerbated are the sexual urges of Sunny Kele (Tusshar) and Aditya Chotiya (Vir Das) that they are compelled to visit a sex-addiction clinic where they run into the twin sisters Lilly and Laila Lele. Yes, that's their names.

There are a couple of things about Ms. Leone in this film that keep you watching. No, no not those, you perverts. There are two of Sunny in almost every frame, one each for the two heroes. You can tell the two Leones apart by the accessories. One wears bikinis and little else. The other wears bikinis and spectacles.

Pure genius, I say. Reminds me of last year's Roy where the exotic beauty Jacqueline Fernandes' double role stood apart through the shades of lipstick that the two characters wore.

Admittedly Ms. Leone is a treat to the eyes. And if her double role can make you bear with the double bores who woo her with the earnestness of polar bears on heat in the cold Arctic region, then there is more from where that is coming from. Shaad Randhawa (once a promising actor in Mahesh Bhatt's productions) is cast as Laila Lele's disabled fiance, and also as the fiance's twin brother.

The wheel chaired Randhawa is throughout referred to as apaahij. There are endless jokes about khada hona (erection) compounded by bananas being eaten, licked, kissed and caressed. The kela is evidently writer-director Milap Jhaveri's favourite fruit. He swamps the screen with them. And with smirky phallic banana jokes which never quite add up to raunchy risque comedy.

The smut quotient is so diminished by the writer's imagination that watching the film is like eating a bag of potato chips soaked in water. It's all talk talk talk and not of a very productive nature. The women characters do all the emoting with their breasts. In one specially smutty sequence starlet Gizele Thakral (lately in Bigg Boss, and also seen in last week's sex comedy) imaginatively named Ms. Boobna, searches in her plate for her French fries with her burger, only to realize that they were concealed under her ample bosom.

This kind of pubescent humour is supposed to bring the house down. If only wishes were orgasms. It is plainly tedious to watch competent actors like Asrani, Vir Das, Sushmita Mukherjee, Riteish Deshmukh (seen for the second time in two weeks as a sex guru) and Suresh Menon struggling to breathe life into lines that even a 12-year old would hide from his smartphone. By the time we reached the scene where Vir was shown dry-humping a horse, I gave up.

Protesters need not draw out their swords and guns. Mastizaade insults every caste, creed and community. So it's all very democratic. Particularly squirmy is Suresh Menon's gay act which again makes me wonder...Why would anyone, gay or straight lust after Tusshar?