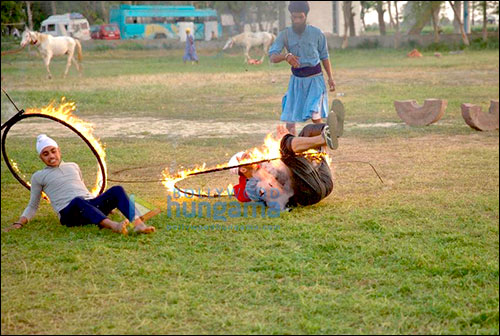 Well, Bollywood's action hero Akshay Kumar who believes in doing stunts himself landed up injuring himself while shooting his introductory song 'Tung Tung Baje' from Singh is Bliing. What we hear is that, while shooting for a stunt scene, Akshay had to jump from the fire hula loop. But while doing that his leg caught fire and immediate actions had to be taken to extinguish the fire.

A source close from the production team says, "Akshay sir speaks volumes of professionalism. Whenever it comes to doing stunts; he always prefers doing it himself and not using a body double. So while jumping from the fired Hula loop, Akshay sir's leg caught fire."

"Immediate actions were taken to put the fire off. Even after the accident, Akshay sir was adamant to perform the stunt again," added the source.

Singh Is Bliing that is presented by Dhaval Jayantilal Gada (Pen) & Grazing Goat pictures LLP, is produced by Ashvini Yardi and Co-produced by Akshay Jayantilal Gada, Kushal Kantilal Gada and Reshmaa Kadakia, starring Akshay Kumar and Amy Jackson in lead roles. Singh is Bliing is all set to release on October 2.