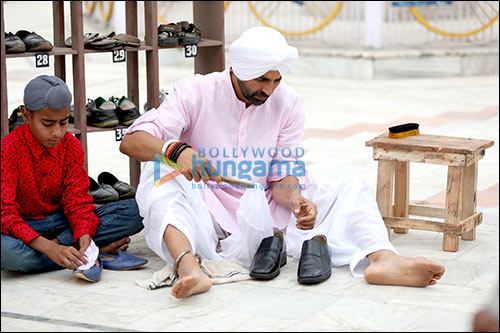 Well, most people aren't aware that Akshay Kumar has been into philanthropy since a long time. What we hear is that, he was recently shooting for a scene in his upcoming movie Singh is Bliing at a Gurudwara in Punjab, wherein the script was to offer seva aka charity work that has him polishing the boots of the devotees in the scene.

A close source from the sets told us, "He was so touched while shooting the scene, that after wrapping up the shoot, he decided to take some time off and went there again to help the little kid to polish the shoes. He wanted to offer seva in a Gurudwara since a long time, but due to his hectic schedule he couldn't."