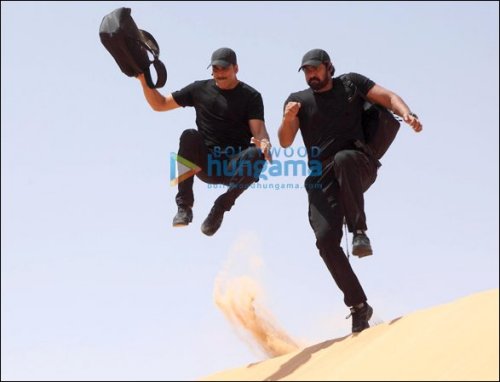 After collaborating for the suspense film Special 26, Neeraj Pandey decided to cast Akshay Kumar in his next titled Baby. The film which will have Tapsee Pannu as the leading lady will also see Rana Daggubati playing a prominent role.


Rana Daggubati, last seen in Department and in Yeh Jawaani Hai Deewani in a cameo, is a South star who made a debut in Bollywood with Dum Maaro Dum. Though the details of the character that Rana will be playing is currently under wraps, we hear that Akshay Kumar and Rana will be seen doing some high octane stunts in this spy thriller.


After completing their shoot in Nepal, the cast and crew of Baby are currently in Abu Dhabi completing yet another shoot schedule of the film. Akshay Kumar along with his co-star Rana Daggubati was shooting some outdoor sequences in extreme temperature of 49 degree centigrade. We also hear that the two actors, who share a very good bond of friendship, had an arm wrestling match on the sets of the film. "Akshay sir and Rana share a very good chemistry on the sets. They had an arm wrestling match, and Akshay sir defeated Rana!" laughs a crew member


Apart from them, Baby also stars Danny Denzongpa. Recently the veteran star revealed that though he cannot divulge the details about his character, he will be seen in a positive role in this film. Other actors include Anupam Kher along with Madhurima Tuli (last seen in Warning) playing the role of Akshay Kumar's wife.


Produced by Bhushan Kumar along with Crouching Tigers Motion Pictures and A Friday Filmworks, Baby is shot in varied locations across the world in places like Kathmandu, Istanbul, Abu Dhabi and Oman. It is slated to release on January 23, 2015.