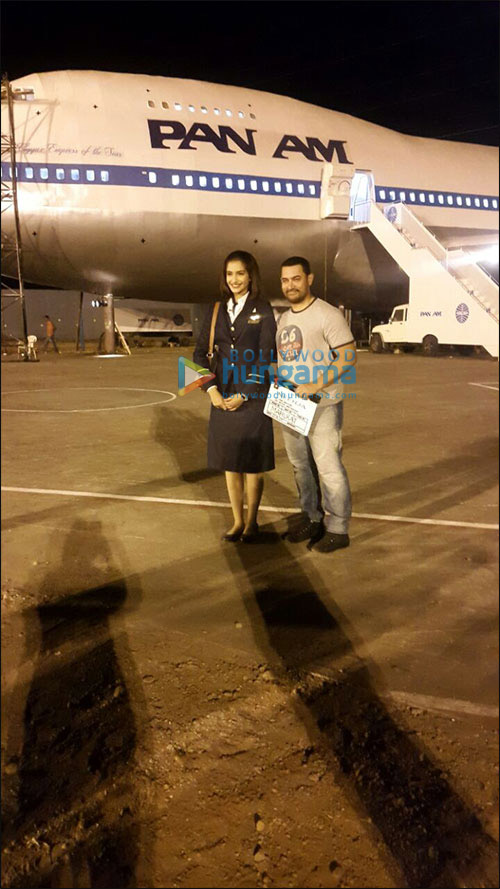 Sonam Kapoor, who is essaying the role of Neerja Bhanot, was in for a surprise when Aamir Khan dropped by on the sets of her upcoming film Neerja. The actor not only boosted the confidence of the cast and crew on the sets but even kick started the film with its Mahurat shot.

Not just him but any other Bollywood celebrities dropped in on the sets of the film, extending their support to the film and its concept. Sonam plays the role of Neerja Bhanot, flight attendant of PanAm and the youngest recipient of Ashok Chakra (highest civilian award for bravery), who lost her life trying to save the lives of passengers from terrorists on board who hijacked the PanAm Flight 73 on September 5, 1986.

Talking about their sweet gesture, director Ram Madhvani, "I knew that getting Aamir Khan, Boman Irani, Vidya Balan, Raju Hirani and Anil Kapoor to speak to the 220 cast would help instill in the team, the dedication and full effort that this film would require. I am forever indebted to Aamir Khan, Boman Irani, Anil Kapoor, Raju Hirani and Vidya Balan for so readily giving their time and energy and for supporting us. I could not have asked for a better featured cast, they really gave it their all. My idea of getting the guests worked very well as the entire cast and team are giving it all through full night shoots. Not one person of the 220 people missed a single shoot day even if they were not well. I'm also very touched that Aamir Khan gave the Mahurat shot of our film."