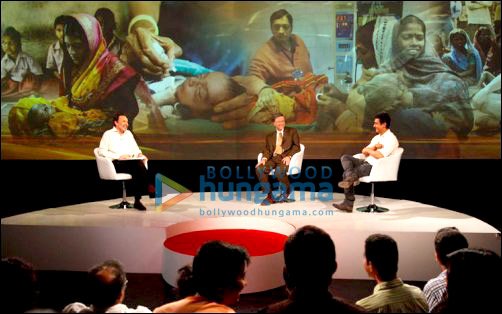 Of late, we have been seeing an increasing number of Bollywood stars rubbing shoulders with the who's who of the western film industry. Taking things a bit differently is Bollywood's perfectionist Khan, Aamir, who recently met none other than tech giant Microsoft's co-founder Bill Gates.


The Microsoft co-founder Gates, who is currently on a tour to India, met with Bollywood superstar Aamir Khan on May 30. Commenting on his blog Gates stated, "I'm looking forward to meeting Aamir Khan, the Bollywood star and activist. I want to hear about his work as a UNICEF ambassador for child nutrition. I also want to hear about his TV show, Satyamev Jayate (Truth Alone Prevails), which is shining a light on some critical issues facing India. And maybe, if I'm lucky, he'll show me a few dance moves."


While commenting on their discussion Gates posted, "Talking toilets with Bollywood star Aamir Khan, discussing how satellites help fight disease. We were filming a question-and-answer segment in front of a studio audience for his show on New Delhi Television, one of India's largest news networks. Prannoy was asking me and Bollywood star Aamir Khan about philanthropy, health, and India's development..."