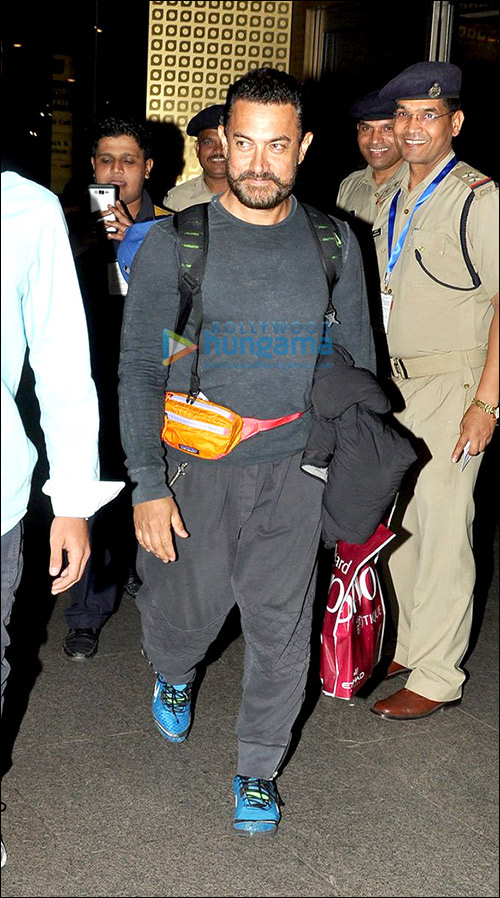 Besides being called and known as 'Mr. Perfectionist', Aamir Khan can also be termed as someone who aptly fits the bill of being a 'chameleon'. In every single film of his, we get to see a 'brand new Aamir Khan' in a never-before avatar. Talking about 'avatars', we all know that Aamir Khan had put on oodles of weight for his upcoming film Dangal, that's based on the life of the legendary wrestler Mahavir Singh Phogat, the man who taught wrestling to his daughters Babita Kumari and Geeta Phogat.

But, today, when Aamir Khan returned from abroad, one was absolutely stunned and shocked to see him in a toned down avatar. He has lost all the extra weight that he had put on for his role in Dangal. He was seen in a grey tracksuit and blue sneakers with a jacket tied on his bag. Aamir Khan looked totally fit and raring to go. With this lean look, news reports state that, Aamir Khan will now be shooting for the younger days of Mahavir Singh Phogat.

Since today also happens to be his birthday, one also saw Aamir Khan interacting with the media, like he does on every birthday. One has to admit that, whatever Aamir Khan does; he never fails to make a statement.

When asked about the weight loss, Aamir Khan said that he was in the USA since the last three weeks in order to focus on weight loss and that he was working out in different forms of exercise for six to seven hours in a day. He added that he did trekking, biking, mountain biking, tennis, swimming and weight training and that he was only sleeping, eating and working out, which helped him immensely in his weight loss.