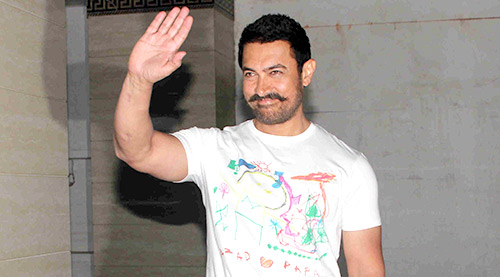 It was a crazy situation in the parking area of Freeda One today morning as a massive media contingent had converged to cover Aamir Khan's 51st birthday celebrations. Aamir joined the media dressed in a t-shirt that was made out of a sketch drawn by his son Azaad and printed by wife Kiran. He has lost 13 Kgs and weighs 82 Kgs as of now. He has to lose another 12 kgs before he can start shooting for the balance portion of Dangal.


Aamir clarified that the rumours of Dangal getting preponed were false. "It will release on Christmas," he clarified. I asked him why he considers wrestling as the hero of Sultan and Dangal as stated by him in an interview recently, Aamir replied that wrestling is a clean sport and unlike Boxing where people get hurt, the intention is not to hurt in wrestling. On being told that his PK costar Anushka Sharma is also wrestling in Sultan, Aamir stated that he wasn't aware of it but he's happy to know that as with Anushka's stint with wrestling, it will give an even more impetus for girls to pursue wrestling. Aamir Khan said that he's excitedly looking forward to watching Sultan this Eid. He didn't have an answer to the customary 'Salman ki shaadi kab hogi' question.


Aamir shared the news that he's trying to purchase a house in Varanasi where his mother spent her childhood. He informed that his team at Satyamev Jayate had been working for the last one year for solving the water crisis in Maharashtra and that is the reason why they haven't been able to start the next season of Satyamev Jayate on television. A journalist asked him that in spite of the fact that Aamir has done so much for the country, what was his reaction when his integrity was questioned? Mr Khan replied that he believes that maximum people emit positivity, there are some people who emit negativity as well and pollute the atmosphere but he strongly believes that eventually positivity will succeed.


Once the press conference was over, Aamir Khan invited the journalists inside his home and as is the annual norm, he informally interacted with them. No video cameras and dictaphones were allowed. This interaction is not meant to be reported. But to be honest, the informal interaction was far more interesting and entertaining than the official press conference. I am sure you shall read a few 'Leaks' very soon. Aamir was cutting jokes and passionately shared some very interesting details about his personal life. It was good to see Aamir enjoying himself especially after the harrowing time that he has gone through in the last few months. I've known several journalists who've written nasty things about Aamir post his Indian Express interview in November on their social media pages. Today I saw a few of them desperately trying to get a coveted selfie clicked with Khan.


I asked Aamir Khan, what does the dialogue, 'Sach aur saahas hai jiske mann mein, anth mein jeet usi ki rahe' from Lagaan mean to him today? "I have always believed in it, and I always will," Aamir Khan signed off.